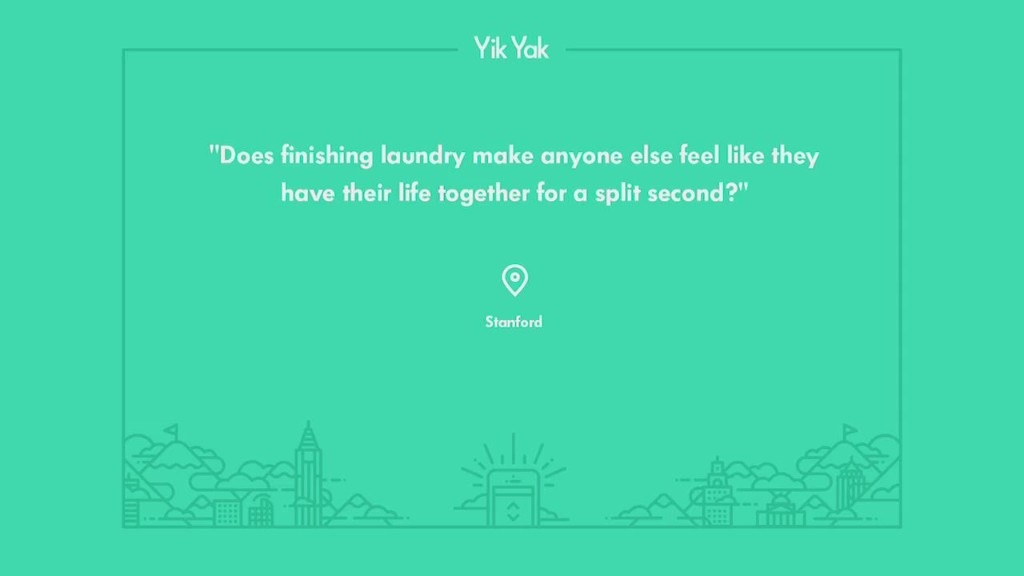 Yik Yak took another step towards social network maturity in the past couple weeks, as the iPhone app developers behind the trending location-based messaging service launched a web app platform. The web app has been in closed beta for several months now; with Yik Yak’s popularity skyrocketing on college campuses across the US the new platform is sure to add a whole new layer of value to the iPhone app.

For the uninitiated, Yik Yak is sort of like a mix between Reddit and Twitter; users post anonymous text and images, only seeing what’s shared within a one-mile radius of them. The “local” scope the iPhone app developers built into the app has made it a huge hit in close-knit communities like college campuses, where it’s quickly become a go-to place for getting quick updates on public issues, advice, and of course goofing around and looking for dates.

This isn’t the first time Yik Yak has been in the headlines for Denver iPhone app developers — pending widespread accusations of enabling anonymous bullying among high school and middle school students, the iPhone app developers controversially geofenced underage users out of the app in 2014, effectively cutting out over half their user base.

While some Denver-area iPhone app developers would view such a move as insane from a business standpoint, venture capital seems to disagree; the company received a further $61 million in funding led by Sequoia within a few months of the incident, signalling the possibility for a smaller, safer Yik Yak to continue growing among an adult (though predominantly twenty-something) user base.

In a blog post to their website, a Yik Yak spokesperson stated that the goal of the new web app expansion is “…giving you the flexibility to yak away with your herd, whether that’s on your phone or your computer!” Like big-name social networks Facebook and Twitter, immersion is key to keeping user churn low. For iPhone app developers creating engagement-intensive community-driven apps, giving users access across platforms is key to keeping the buzz from fading when the next hot platform comes along.