“The most important thing for you as an entrepreneur trying to build something is, you need to build a really good team. And that’s what I spend all my time on… I spend probably 25 percent of my time recruiting, finding good people… to put them in more impactful roles.
—Mark Zuckerburg

25 percent — wow. That means in the 12 years since Facebook was founded, 3 entire years of the CEO’s workdays have been spent on nothing more than finding, vetting, and hiring talent.

…But Facebook CEO Mark Zuckerburg isn’t the only successful startup founder or iPhone app developer to dedicate so much effort to team building. In fact, virtually all successful startups will tell a similar story.

Considering that rapid growth is the top goal of most startups, it’s no surprise that the personalities and skills that make up a startup team are at least as important as the personality and skills of the person who came up with the idea.

Without a good mix, growth is impossible — according to a recent study, “failure to build the right team” was one of the top 3 reasons for early-state startup failure. 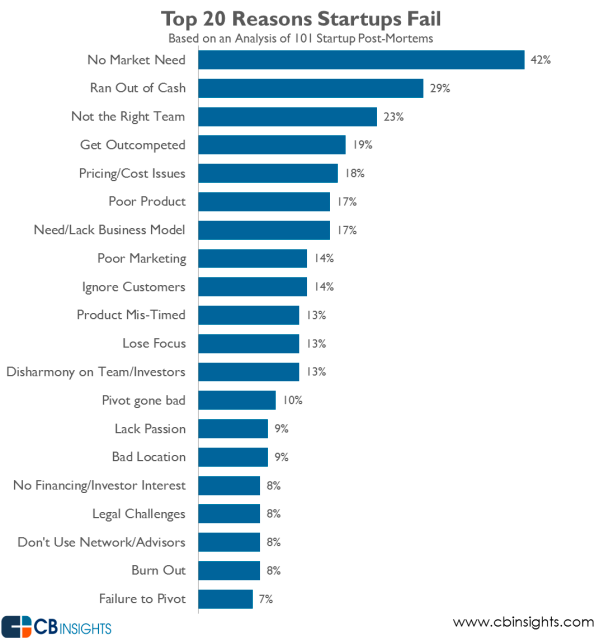 The question is, where do you start when you’re building out a startup team? (Especially in a market with a notable shortage of iPhone app developers, engineers, and designers?) What people and skill sets do you need to realize your dream, and where can you go to find them?

In this post we’ll walk you through the process of building a startup team — from identifying your co-founder, to acquiring top-notch coding talent, to scaling the team under rapid growth.

Start with the co-founder Angel investor and Silicon Valley thought leader Paul Graham cites single-founder team structures as the number one startup killer — ahead of even funding issues or poor planning — before going on to add that “even companies you think of as having one founder, like Oracle, usually turn out to have more. It seems unlikely this is a coincidence.”

Co-founders are critical to startup success for several reasons. Logistically, developing and marketing a mobile app by yourself is borderline impossible with only 24 hours in the day. Working with a co-founder doubles the time invested in getting your iPhone app idea planned, developed, and off the ground. Perhaps the most important contribution a co-founder brings to the table, however, is that of emotional support. Growing a business from scratch is a roller coaster, and many a startup died when a single founder threw in the towel during a dark stretch.

Additionally, bringing on a co-founder allows you to augment and enhance the areas where you fall short when it comes to startup growth. For example, a technical coding wiz would do well to partner with a business-minded creative, and vice-versa. A time-tested iPhone app developer could find success pairing up with a business management expert.

Every startup team looks different, but when you spend as much time as we have watching startups grow from seed to sustainable, patterns begin to emerge. iPhone app developers in the startup world like to refer to this as the “perfect triangle” of a core startup team — three compatible and complimentary personalities who form the blueprint for what the company will become. Generally, that breaks down to a CEO, CTO, and CPO:

If there’s room for one more person, startups often seek out a core “growth hacker” or marketer with good hustle. If there’s only budget for two, then it’s vital that the CEO also have good design and sales chops — otherwise, you’re left with a great product and no one to use it.

Startup growth is different from regular business growth in one key way: it’s extremely, extremely fast. Tech products tend to balloon quickly, and in the case of iPhone app development “slow and steady” does not win the race. (Trust us, competitors will be at your heels the second your app idea starts to gain users.)

Growing from a team of 2–4 to a team of 200–400 is no easy challenge, so it’s vitally important that the “core” initial team be as perfectly composed as possible. If the team becomes unbalanced at any stage of growth, adding more members on top will only add confusion.

Here’s what a typical progression looks like from start to venture stage:

Twitter hired a slew of new engineers and designers at this point, while Uber focussed on nurturing relations with their drivers, and the NYC iPhone app developers at Poncho hired joke writers. Scalability looks different for every company. The only true constant is engineers and designers: growing tech products always take more horsepower than you’d expect to keep running.

Once you’ve identified your startup’s core needs and skill set requirements, it’s time to scout talent. The question is: where?

Finding co-founders is notoriously hard if you don’t have a personal network through the tech community in your city. Scouting technical and sales talent is a little more straightforward, although startups face a catch–22 where much of the talent pool is already engaged with other companies — particularly in high-demand roles like backend engineering. While some startups will always try to “poach” talent from established companies, this tactic is usually a waste of time. Instead, you should simply work with an iPhone app development company in the first place, or hire engineers fresh out of coding boot camps eager more likely to take a gamble on a young company.

That said, the number one best place to find early-stage team members is your personal network. You already trust them, they believe in your mission, and will be aligned with your goal enough to take a gamble on your iPhone app idea working long-term.

Outside your network, the best talent isn’t always floating their credentials on LinkedIn or job boards. So, go where they hang out: GitHub for engineers, Dribbble for designers, and etc. Finding someone with a passion for your niche who’s already floating intriguing projects publicly is probably someone who’s willing to take a bet on helping build something new rather than take a “safe” job with a larger company.

Interview for the job, not the skillset

A mistake many startup founders make is hiring someone because they have a broad skillset that sounds attractive without considering the actual day-to-day work. Technical leads love to throw crazy puzzles at prospective hires, but what’s the point of solving a head game in a completely different language from your product’s backend?

When interviewing, put passion for your startup’s core value proposition front and center. Then, test technical chops on technologies you actually use to run the product. (This can be hard for non-technical founders, but in either case you’re probably partnered with a Boston app development company anyway.)